U Thant Island-New York We Are Not Allowed To Visit 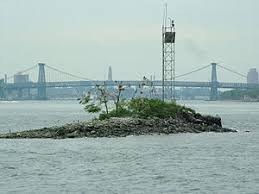 Have We Ever Think About Strange Islands? Then we first have to talk about islands. You may not realize it, but New York City is full of them. Manhattan itself is technically just one 13.4-mile-long island. You’ve also got Governors Island, Liberty Island, as well as Staten Island. But there’s one island in New York that you may not know about, and no, it’s not the tiki bar Jade Island, which is fabulous by the way — do yourself a favor and try the pu pu platter. It’s called U Thant Island.
The Island In new York we are Not Allowed To Enter:
U Thant Island.
it’s one island in New York that nobody is allowed to visit. It sits in the East River, right below Roosevelt Island near the UN headquarters, and for something so tiny has a pretty fascinating history. In 1892, construction of an underground rail passage began that was meant to connect Manhattan to Queens via a tunnel under the river. Builders had to drill through the granite under water, and that excavation produced excess landfill, which accumulated and eventually produced a tiny mound of rocks, or as we in the biz call it, an island. The island was originally named Belmont Island, after August Belmont Jr., the man who financed the construction project. The original tunnel is now used by the 7 Train. And as for the island, minus the occasional tanker collision, up until recently has had a pretty uneventful existence. Then an organization called the Peace Meditation at the United Nations, a Buddhist group that followed spiritual leader, prolific artist, and super-ripped dude Sri Chinmoy, leased the island from the city in 1977. They rechristened it U Thant Island to honor the third secretary general of the UN, a former Burmese diplomat named U Thant, who was a friend of Sri Chinmoy. They also did some light landscaping and erected a 30-foot metal “oneness arch.” But they were only allowed to visit a few times a year because of the heightened security around its neighbor the United Nations. All remained peaceful on U Thant until 2004, when New York City hosted the Republican National Convention. 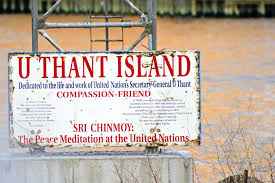 A filmmaker and artist named Duke Riley decided to protest by rowing a boat out to U Thant in the middle of the night, unfurling a giant glow-in-the-dark flag from the navigation tower that’s on there, and declaring it a sovereign nation, before being apprehended by the Coast Guard. So I called the New York Office of Land Management and tried to schedule a visit. Hey, I wanted to call and see if it’s at all possible to set up a time to go visit U Thant Island on the East River? nobody is allowed to visit U Thant Island. Turns out it’s now a protected sanctuary for migrating birds, including a colony of double-crested cormorants that nest in the “oneness arch.” So you can’t actually go on it, but I still wanted to get as close as I could. Despite a total lack of experience and a quickly approaching thunderstorm I jumped in a canoe and headed out onto the lovely East River. {Jennifer Catherine gates Unknown Facts}We paddled through the water, passing Williamsburg and Roosevelt Island, until we finally saw it in all its glorious, tiny splendor. To most people, it may look like just a pile of rocks in a filthy river. And … I guess it sort of is. But there’s also something kind of wonderful about it too. Being up close to it made me realize that there’s something special about U Thant. Amidst the hustle and bustle and millions of people, there’s this 125-year-old speck of land tucked away from— So I learned a thing or two about what not to do when your canoe starts tipping over. And as it turns out, I sort of did make it onto U Thant Island after all. Granted, it was in an effort to not drown in the East River, but I think it technically still counts. I didn’t die, which was good, and I’m glad I was actually able to see U Thant close up. But for now, I think I might just stick to this island, which is a little bit more my speed.